After my first baby steps into the retro-computing world with a ZX81, I thought I should add a new member to the family. In memory of the late Lord Sinclair, it had to be a ZX Spectrum, and nothing else. 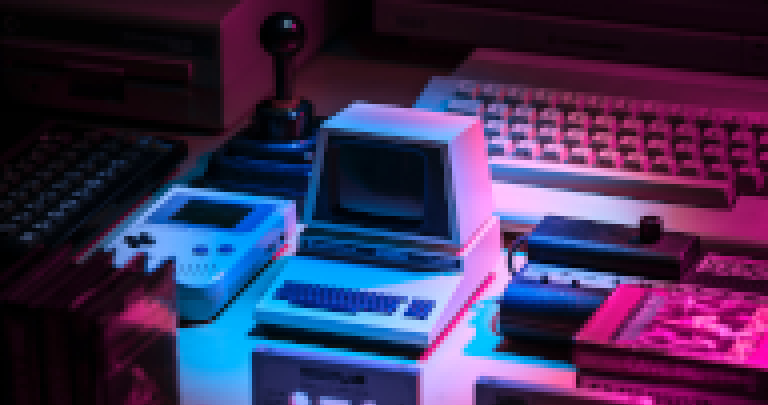 I did not own a ZX Spectum myself, but used it, played with it and programmed it at a friend’s (the same that had a ZX81. He migrated to a Spectrum something like a year later, around late 1982 or early 1983)

I had good luck last time with Leboncoin. Finding a “Speccy” on this site is pretty easy. I found a nice offer (less than 90€), with a boxed ZX Spectrum, a manual and a joystick expansion. We stroke the deal. Unfortunately, the seller couldn’t send the package in time, so the deal was automatically cancelled after a week of waiting. I then searched for another ZX Spectrum, and found one, a bit more expansive, but in its original package, sold along with a Peritel (french for SCART connector) expansion and cables.

Deal was done, the package arrived home a week later: 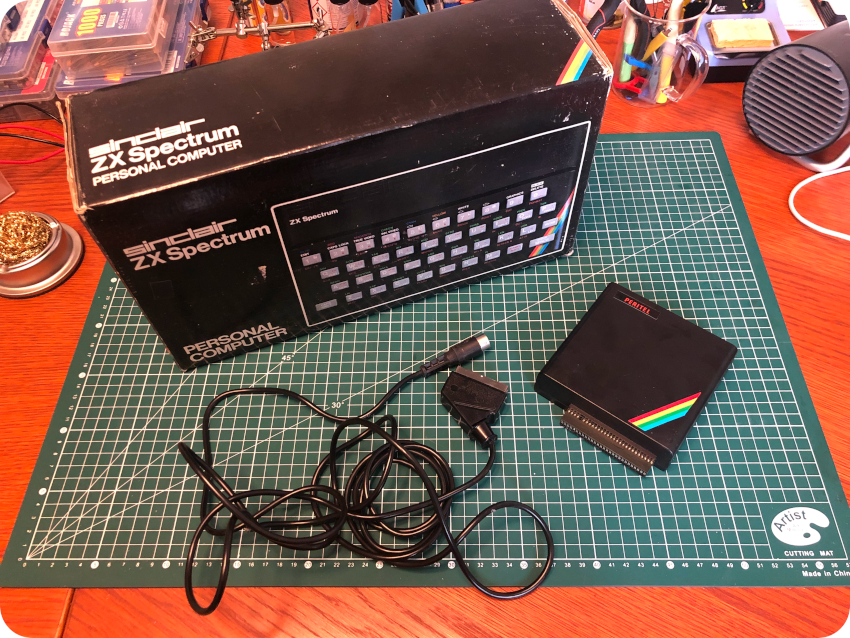 The ZX Spectrum is smaller than I remember. Surely because I was around 11-12 years old when I used one. Compared to the ZX81, it is almost as wide, a little less deep, but much heavier.

Overall, the ZX Spectrum I got was in good conditions. A bit dirty, especially the rubber keyboard (traces of some kind of glue on a few keys), a few stains on the case, but almost no scratches on the keyboard metal plate: 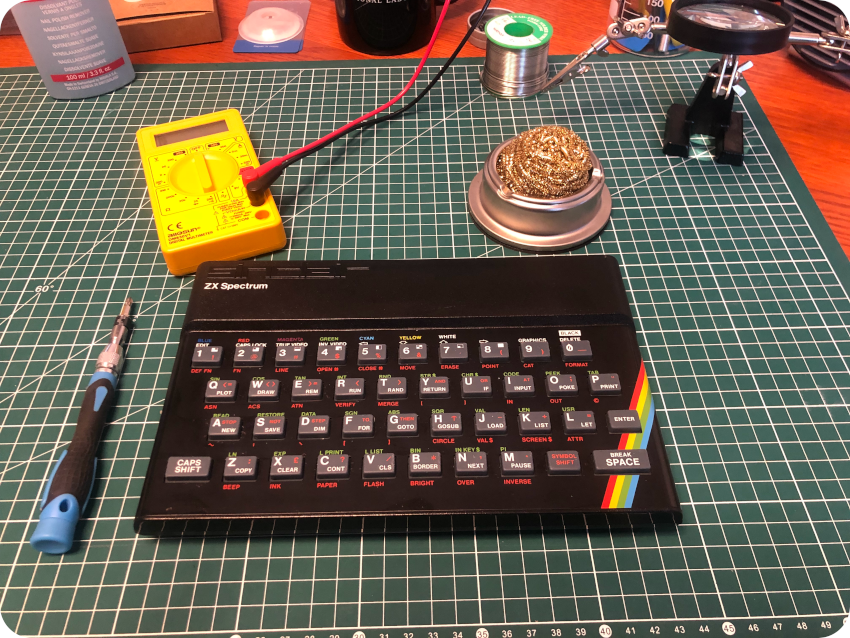 Like its little brother, this Speccy didn’t smell particularly good. The previous owner might have been a smoker. From the outside, no signs of corrosion though.

Opening up the ZX Spectrum

Let’s flip the ZX Spectrum, then remove and store the 5 screws from the back: 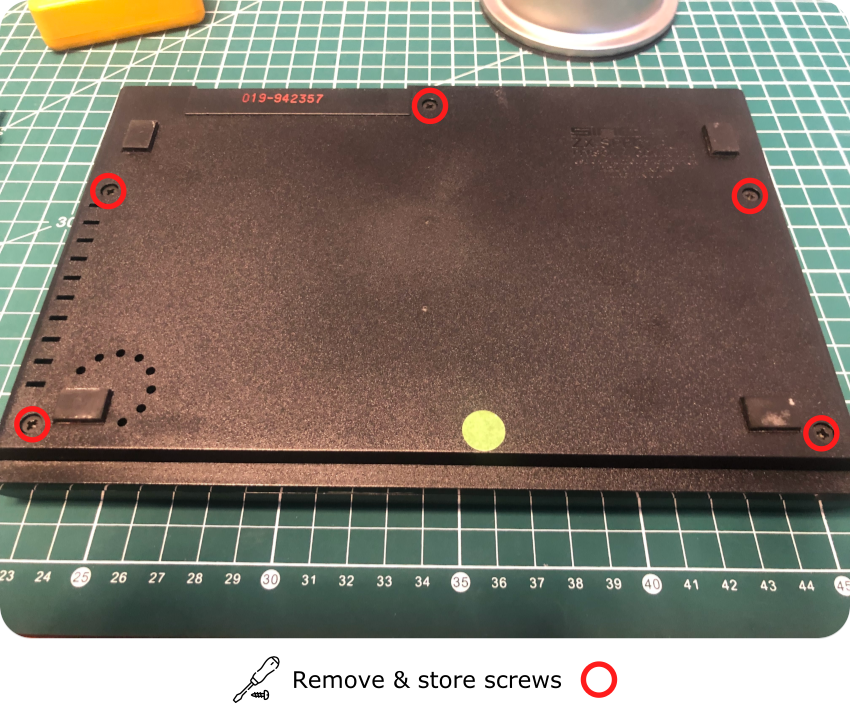 Gently separate the top and bottom parts of the case. You will then see a pair of ribbon cables, connecting the PCB to the keyboard: 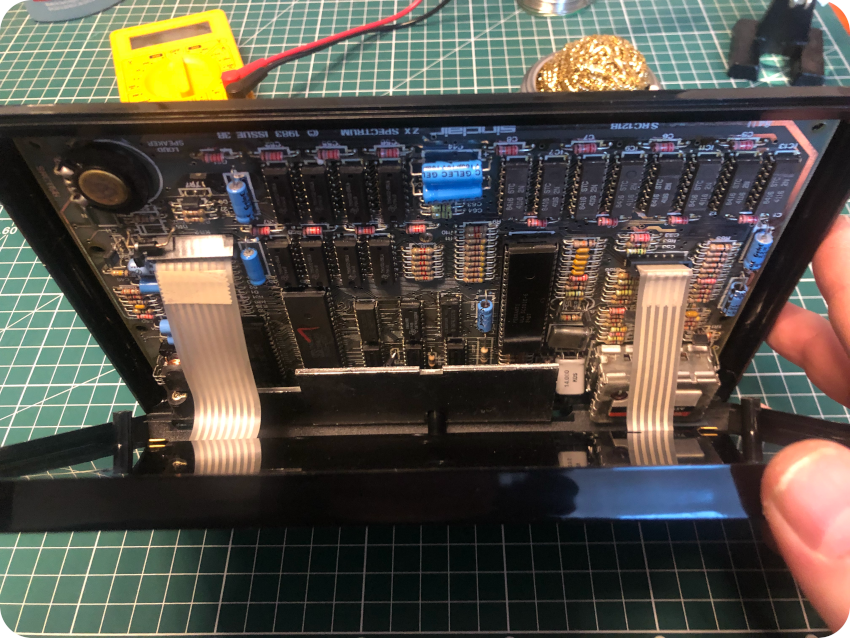 Just like for the ZX81, these ribbon cables don’t age well and break apart very easily. You can grip each of them close to the connectors and carefully pull them free: 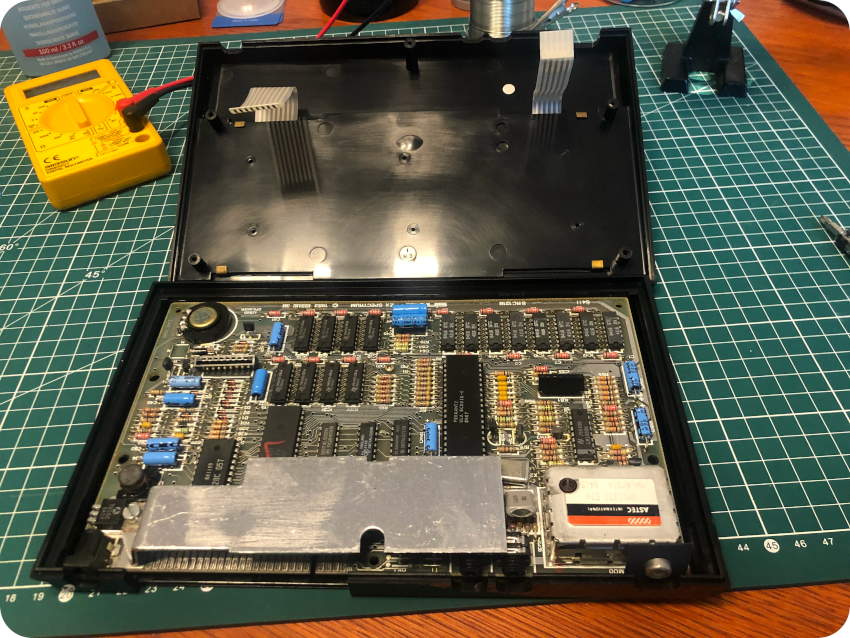 Both of the ribbon cables were in perfect conditions. And I did not break them (they were easier to pull than the ZX81’s).

The last screws from the PCB can now be removed, as well as the large metal shield bolted next to the voltage regulator.

The plastic case is now ready for a soapy bath and a good scrub with a toothbrush. Once dried, an anti-static cleaner was applied to both parts with a micro-fiber cloth. Stains were removed. The rubber keyboard was then scrubbed and cleaned. I did not removed it from the case, but could remove the glue that on some of the keys without damaging them.

Let’s take a look at this ZX Spectrum’s PCB. It is more complex than the ZX81’s, but still easy to understand: 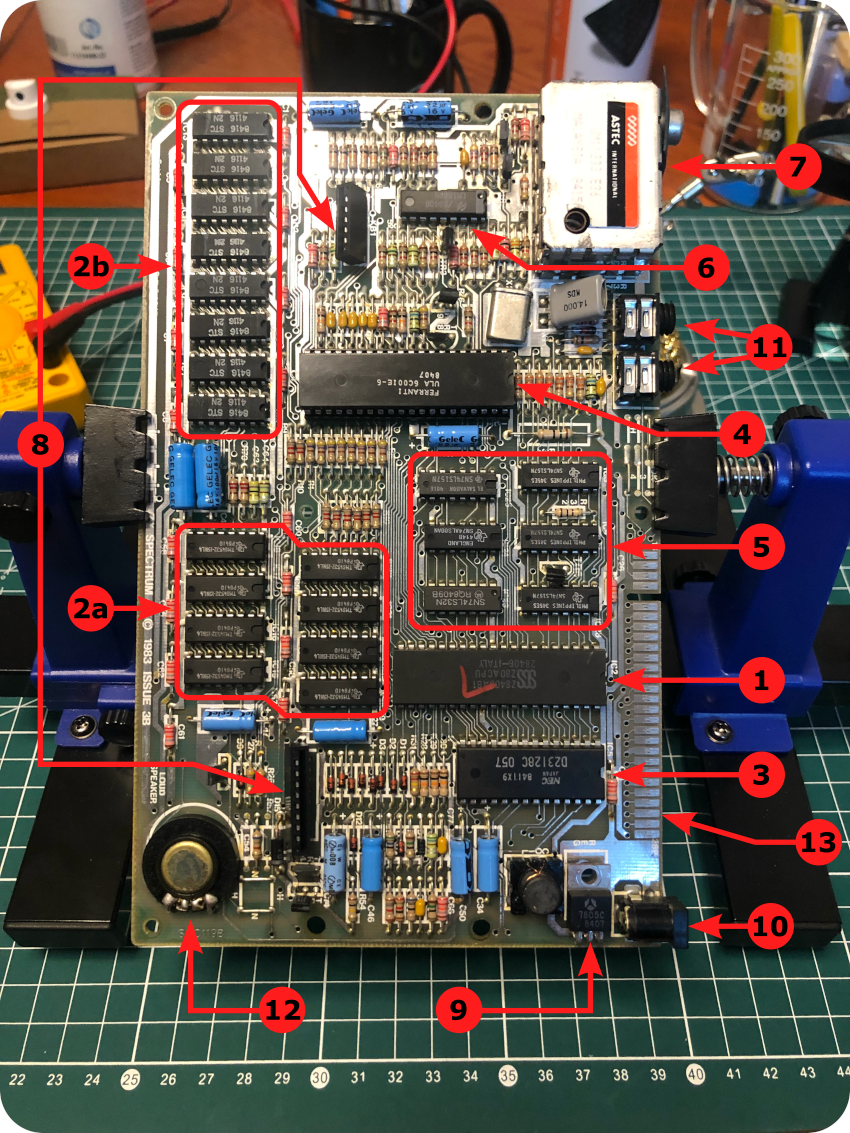 There have been many revisions of the ZX Spectrum PCB. This one is an “issue 3B” board, built around:

Note: to identify the IC’s manufacturers, I used this handy logo sheet:

Inspecting and cleaning the board

I inspected the back and the front of the PCB, looking for bad solder joints, corrosion, bad / cut traces or leaks. I took a particular intention to the radial electrolytic capacitors, that were all looking good: 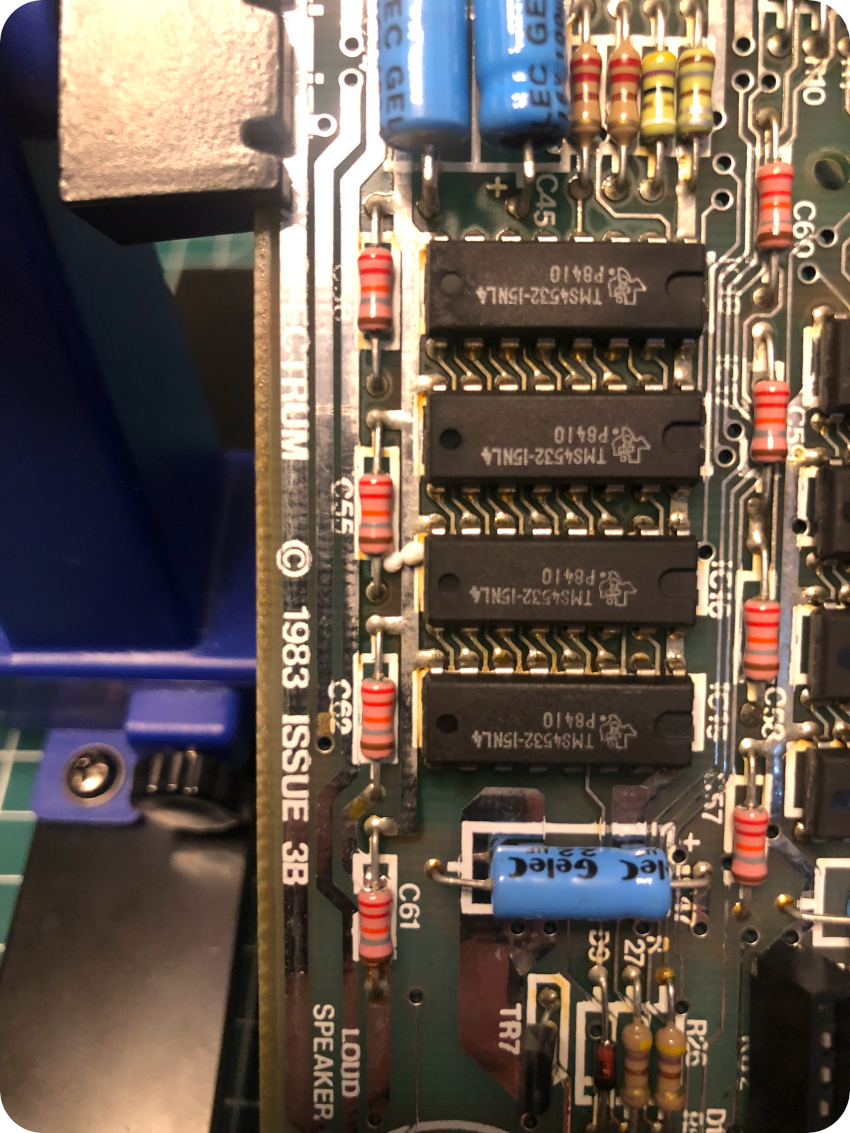 I then cleaned both sides of the PCB with Isopropyl Alcohol, and cleaned all the connectors with a contact cleaner: 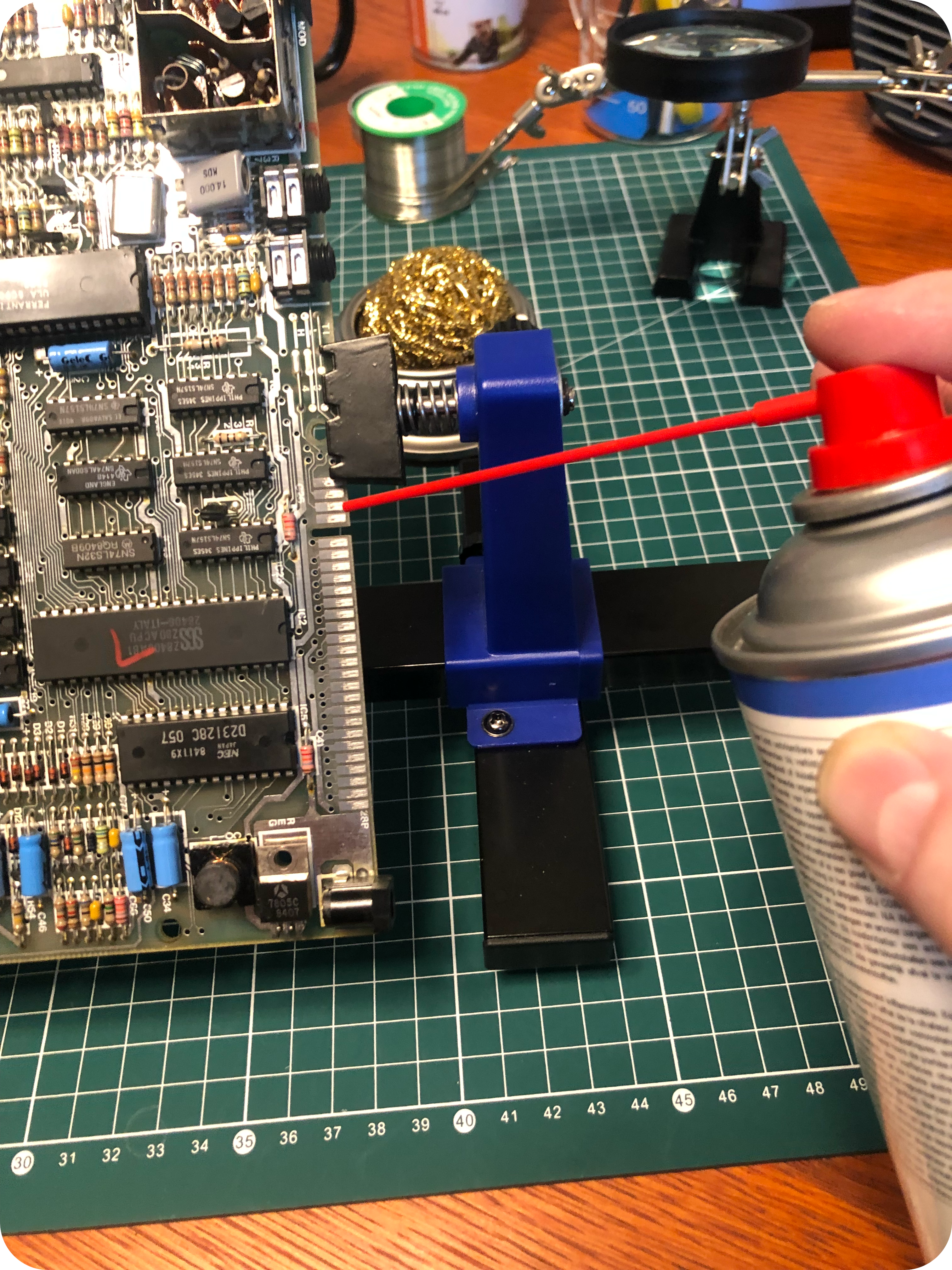 I then opened up the RF modulator to inspect its components. No signs of modifications (like a composite mod for example), everything looked good and unspoiled: 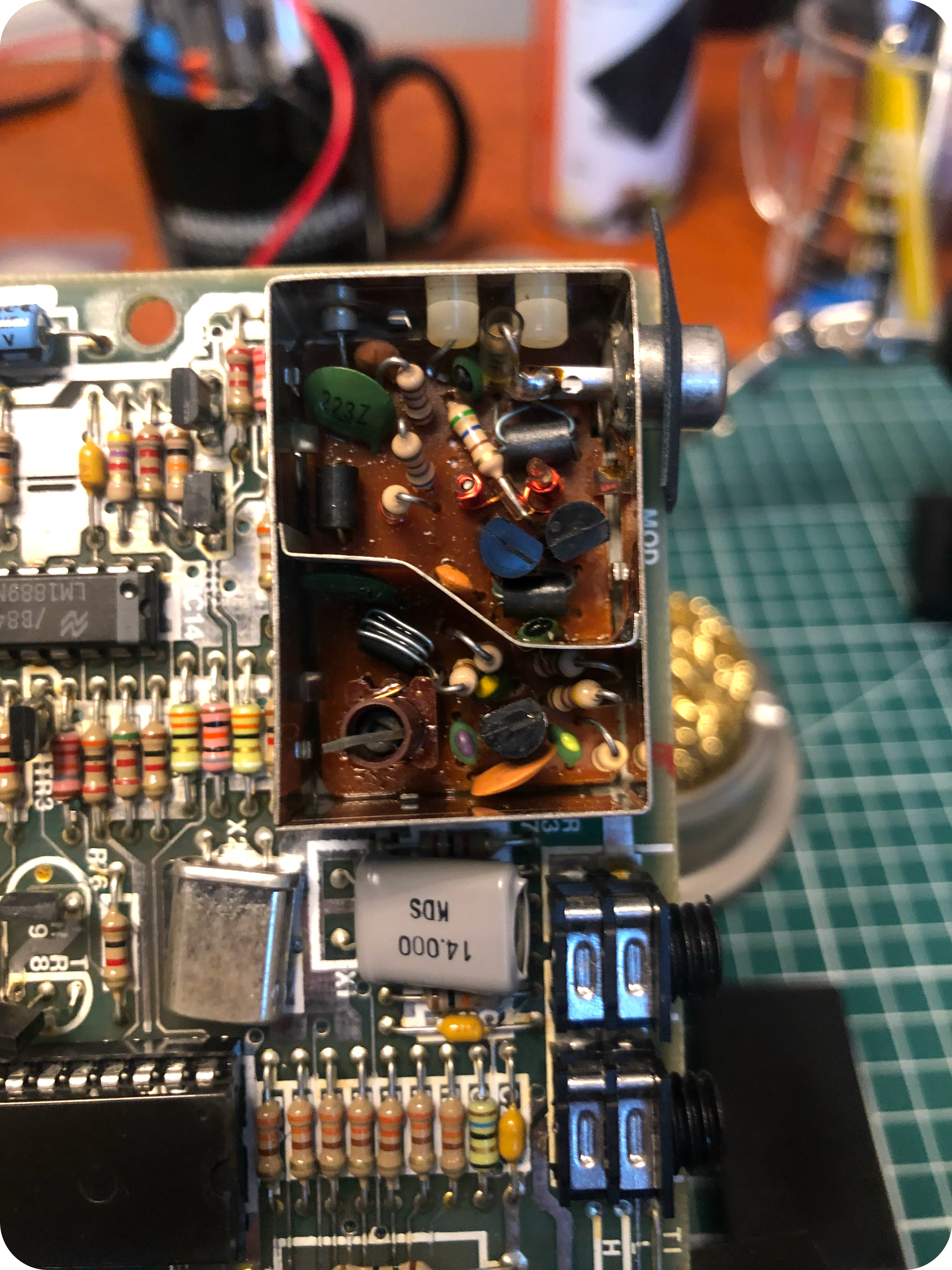 A quick test and … next steps

In the meantime, both parts of the plastic case had dried. And since the PCB was inspected and cleaned, I carefully reassembled the Speccy. 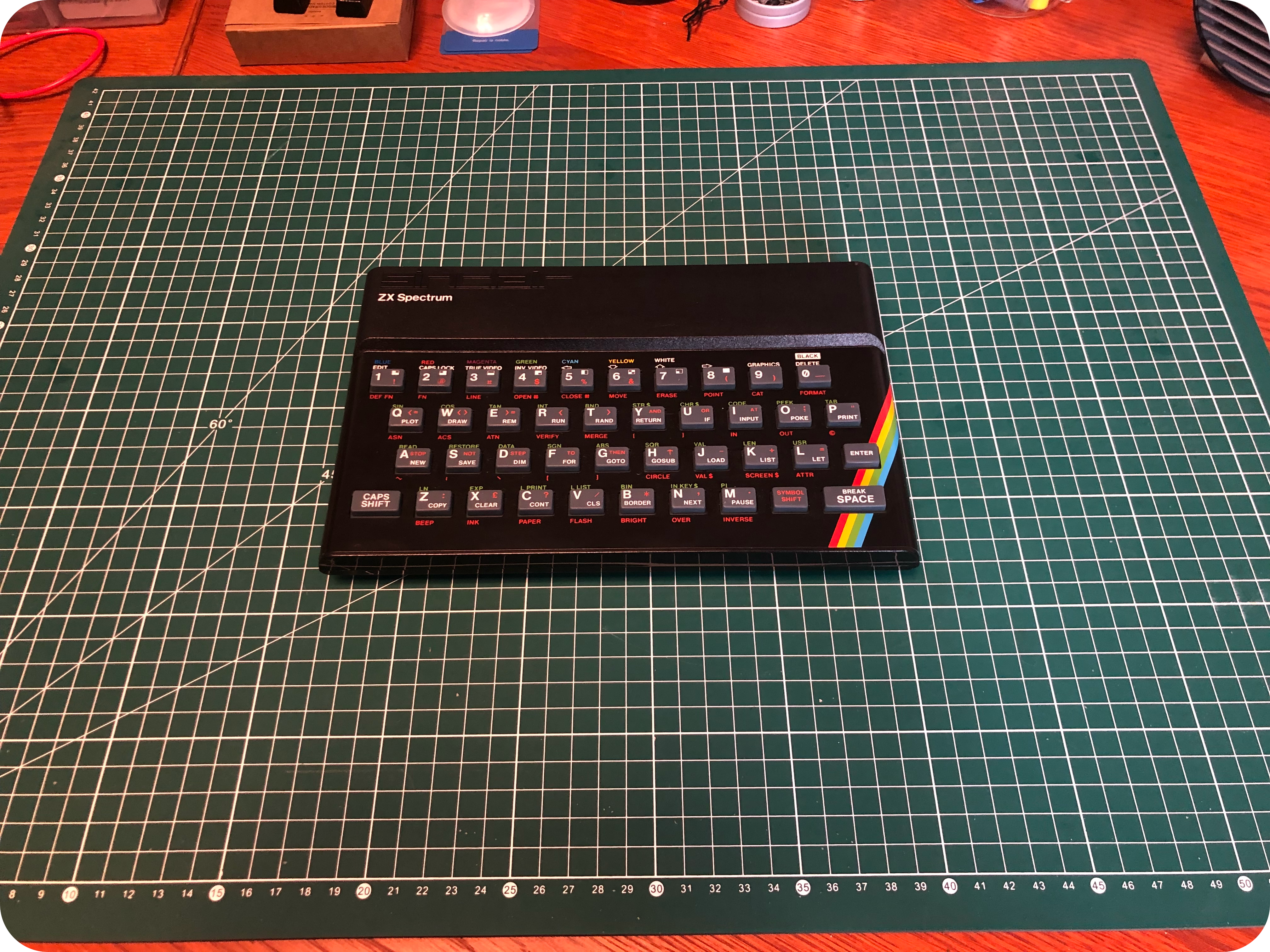 I had hang this LED TV to a wall of the room I use for remote-office a few months earlier. This is the room where I also set up my bench to work on vintage electronic devices. I thought this 10-15 years old TV may prove to be handy for testing these, since it has HDMI, SCART, VGA, analog + digital antenna and composite inputs.

Indeed, to a my surprise, after messing a bit with the TV input and picture parameters to select the right input source, then to display, zoom and scale the video output properly to its original 4/3 format, I was greeted with this vintage but familiar welcome : 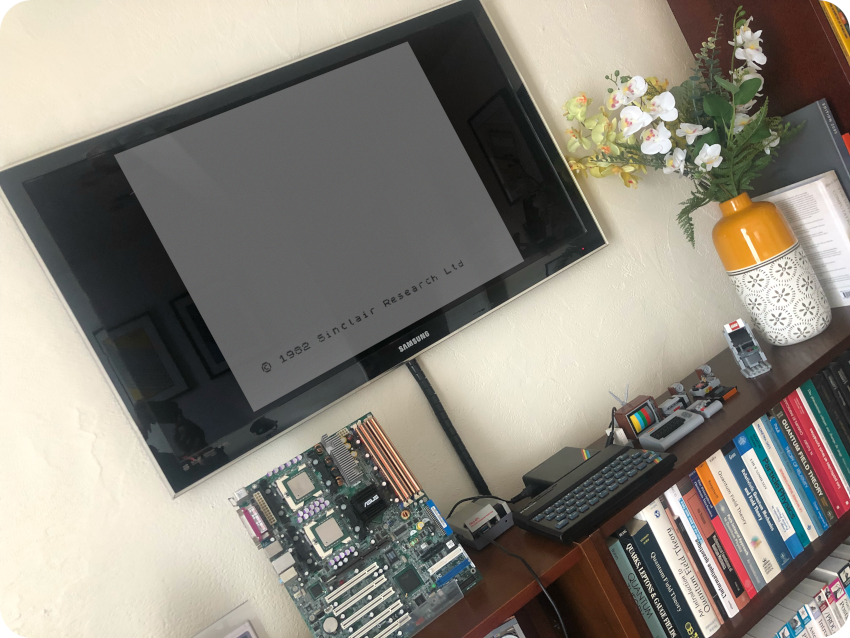 The video quality is actually worse than what this scaled down picture shows. But, frankly, I had never used the SCART interface of this TV before, and wasn’t even sure this would work. Maybe I am lucky. But I’m quite happy it worked.

Still, I will probably invest in an OSSC (or maybe a RGBtoHDMI interface) later on, expecting from it a better picture quality, and better compatibility with the other vintage devices I am thinking of playing with.

Meanwhile, it is time for a little Sinclair family reunion. And time to meet a friendly TARDIS, as a tribute to the British culture from a frog-eating Frenchman. 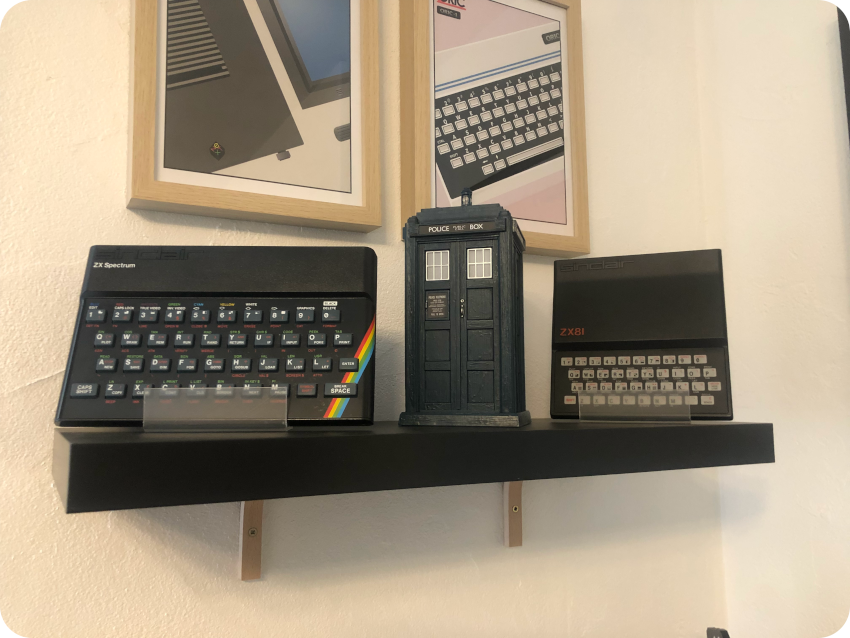 Oh, and speaking of British computers, I bought an Amstrad CPC 464. I had to. Really.

But that’ll be the subject of a next post …