In a series of posts, we introduced various quantum computing concepts:

In addition to these concepts, we devoted two posts to the very crucial topic that is complexity:

In a recent paper, computer scientists Ran Raz and Avishay Tal rocked the world of quantum complexity so much it is now time for an update on that subject !

Back to complexity classes

One of the purposes of theoretical computer science is to sort problems into complexity classes. Quoting Quanta Magazine, a complexity class “contains all problems that can be solved within a given resource budget, where the resource is something like time or memory.”

In a previous post, we have introduced the two most famous complexity classes:

Also, within the NP class, we introduced NP-complete and NP-hard problem (a problem is said to be NP-hard if an algorithm for solving it can be translated into one for solving any NP-problem), as well as  NP-intermediate (NPI) class (problems in the complexity class NP but that are neither P nor NP-complete).

Determining whether it is possible to solve these problems quickly, called the P versus NP problem, is one of the principal unsolved problems in computer science today: 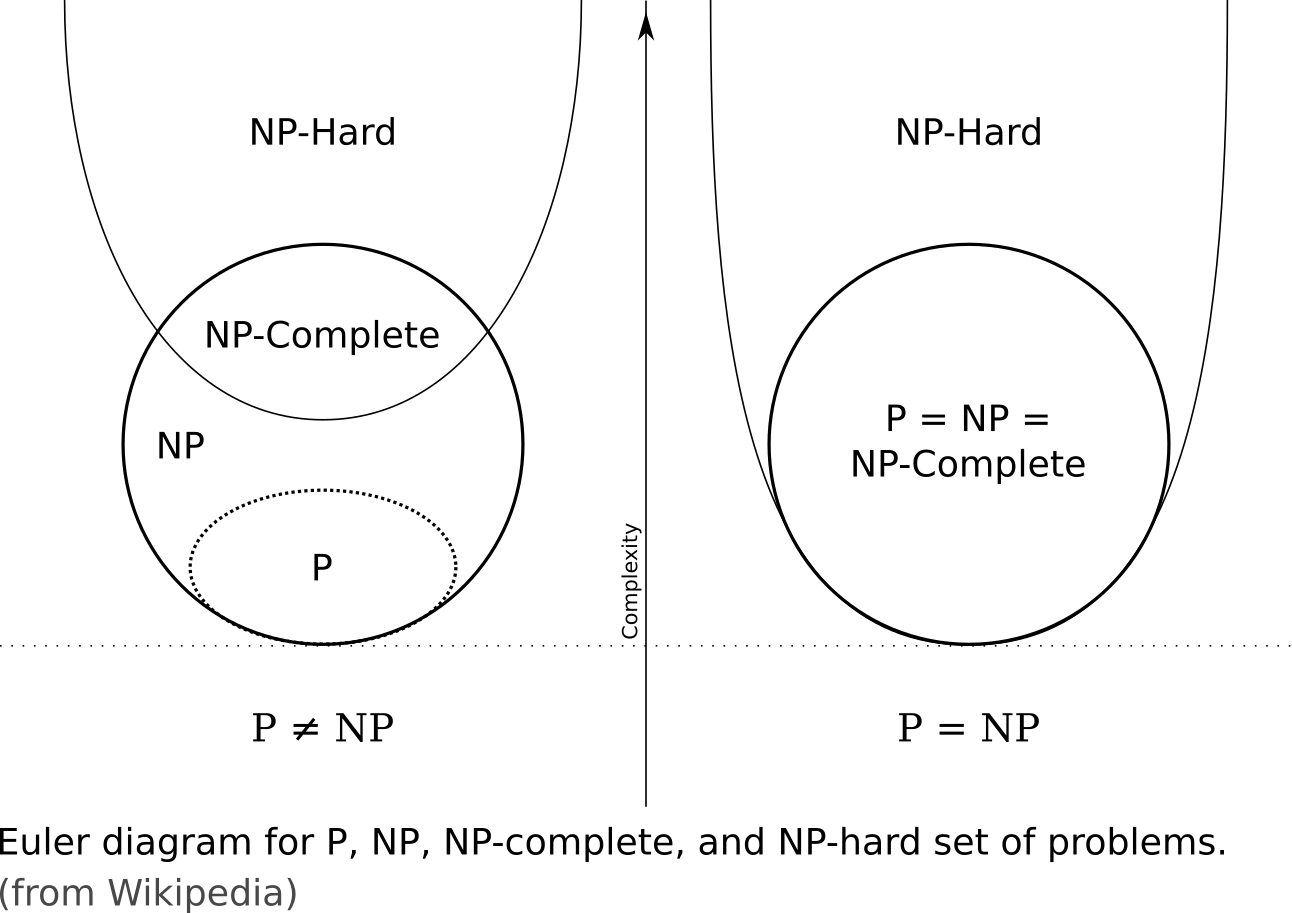 A central task of quantum computing theory is to understand how BQP fits in with classical complexity classes. That is why the boundaries of BQP, sketched in the following diagram, are uncertain: 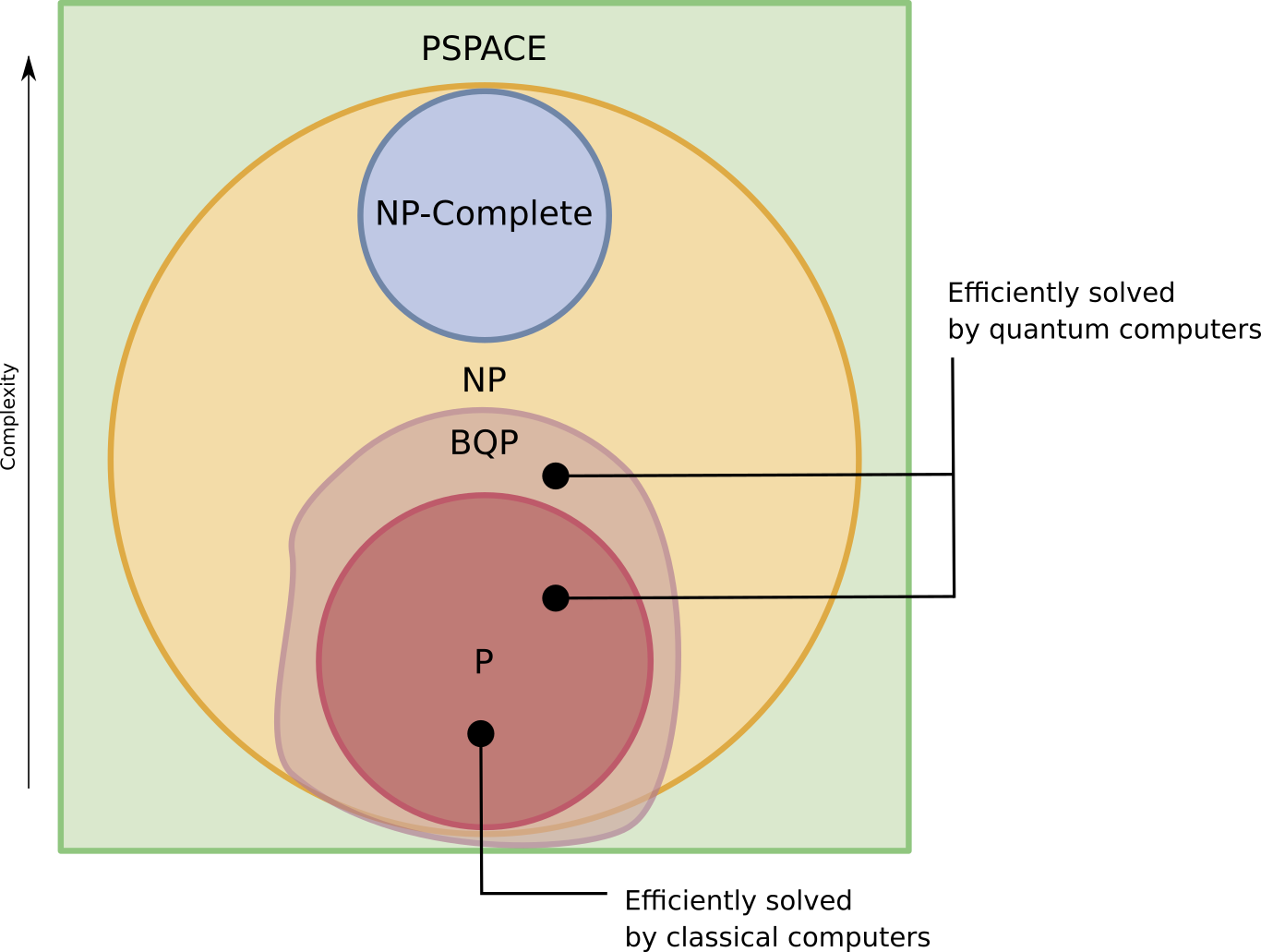 So far, we know that:

Polynomial hierarchy
In computational complexity theory, the polynomial hierarchy is a hierarchy of complexity classes that generalize the classes P, NP and co-NP to oracle machines. An oracle machine is an abstract machine used to study decision problems. It can be visualized as a Turing machine with a black box (called an oracle), which is able to solve certain decision problems in a single operation.

The complexity class PH is the union of all complexity classes in the Polynomial Hierarchy. PH is the is a generalization of NP to allow multiple quantifiers such as ∃ (i.e. there exists), ∀ (i.e. for all), etc. (see second order logic for details).

You can think of PH as the class of all problems classical computers could solve if P turned out to equal NP.

Up to now, there were some evidence that BQP was not contained in PH. This result is now proven by Ran Raz and Avishay Tal.

The best way to distinguish between two complexity classes is to find a problem that is provably in one and not the other.

If you want a problem that is in BQP but not in PH, you have to identify something that “by definition a classical computer could not even efficiently verify the answer, let alone find it,”  (Scott Aaronson).

The first step was the introduction of the concept of “forrelation” (also known as Fourier checking) by Scott Aaronson and Andris Ambainis. See for example:

The problem to be solved is the following:

To distinguish between complexity classes like BQP and PH, one would like be to measure the computational time required to solve a problem in each. Unfortunately, nobody has a clear understanding of how to measure actual computation time.

When the thing they’d really like to prove is beyond their reach, computer scientists often resort to oracles. They measure something else that they hope will provide insight into the computation times they can’t measure: they work out the number of times a computer needs to consult an oracl” in order to come back with an answer.

We can get an understanding of complexity by allowing both machines access to the same oracle and seeing what we can separate. In our case, the problem is to figure out whether two random number generators are secretly related:

The paper published by Ran Raz and Avishay Tal shows that quantum computer need just one hint, while even with unlimited hints, there’s no algorithm in PH that can solve the problem.

Quantum and classical computers exist in a different computational realm

To finish this update, let’s quote Quanta Magazine: “The work provides an ironclad assurance that quantum computers exist in a different computational realm than classical computers (at least relative to an oracle). Even in a world where P equals NP […] Raz and Tal’s proof demonstrates that there would still be problems only quantum computers could solve. Even if P were equal to NP, even making that strong assumption,” said Fortnow, “that’s not going to be enough to capture quantum computing.”

Note: A few paragraphs and illustrations of this post are based on Quanta Magazine.