The worldwide quest to build practical quantum computers is undergoing a critical period. Fault-tolerant quantum computers will soon provide significant computational speedups for problems like factoring, search, or linear algebra, etc. During the next few years, a number of different quantum devices will become available to the public.

Let’s start first with a general recap on photons, which are elementary spin-1 particles. By virtue of their integer spin, they are bosons (as opposed to fermions with half-integer spin). By the spin-statistics theorem, all bosons obey Bose–Einstein statistics (whereas all fermions obey Fermi–Dirac statistics). As such, they do not obey the Pauli exclusion principle restrictions (no two identical fermions  may occupy the same quantum state simultaneously).

The following image sketches the difference between bosons and fermions:

Imagine two apparati, one containing a gas of bosons, while the other one contains a gas of (non interacting) fermions. As the temperature drops near absolute zero, the gas of bosons collapses, forming a Bose-Einstein Condensate.  Fermions can’t reach this state, since they can’t occupy the same quantum state. The total energy of the Fermi gas is then larger than the sum of the single-particle ground state. The energy of the highest occupied quantum state is called the Fermi energy.

At the most elementary level, one can see fermions as the perfect candidate for building blocks of matter, while bosons are candidates for interactions. As such, photons are the carriers of the electromagnetic interaction.

Photons are indeed the quantum of the electromagnetic field which is understood as a gauge field, i.e., as a field that results from requiring that a gauge symmetry holds independently at every position in spacetime. For the electromagnetic field, this gauge symmetry is the Abelian U(1) symmetry, which reflects the ability to vary the phase of a complex field without affecting observables such as the energy or the Lagrangian.

The quanta of an Abelian gauge field must be massless, uncharged bosons, as long as the symmetry is not broken. The photon thus is massless, moves at the speed of light in vacuum, has zero electric charge.

Each photon carries one quantum of energy, equal to

is its angular frequency). Photons are emitted in many natural processes. For example: 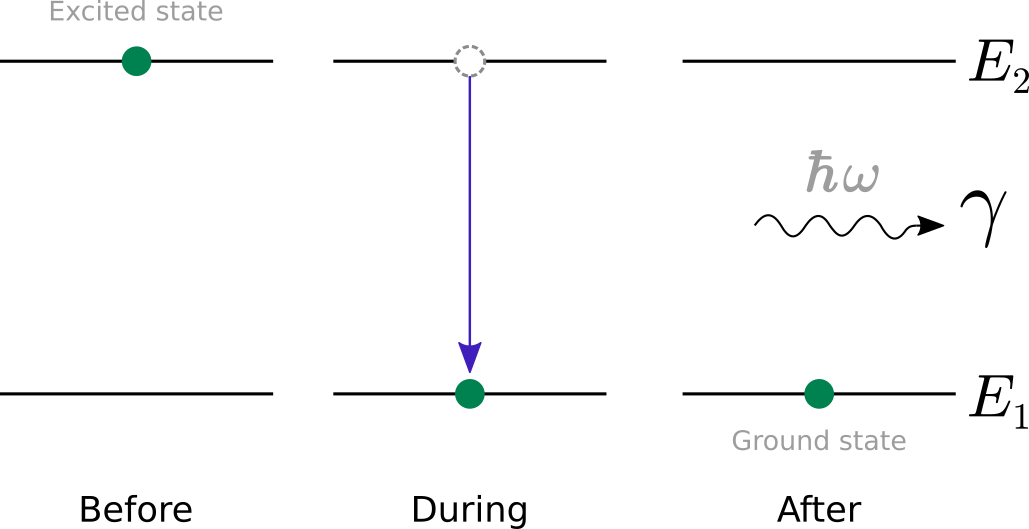 The downside is that photons do not naturally interact with each other, and in order to apply 2-qubit quantum gates such interactions are essential. 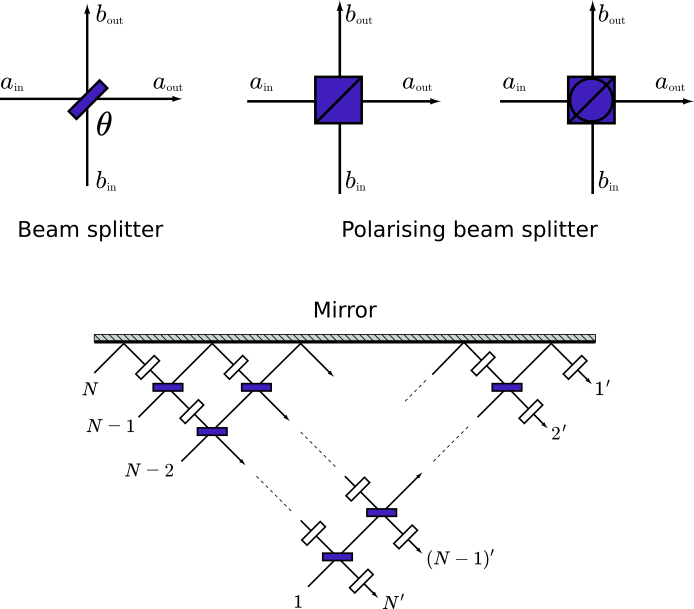 Each linear optical element equivalently applies a unitary transformation on a finite number of qubits. This network of finite linear optics can realize any quantum circuit.

An intrinsic problem in using photons as information carriers is that photons hardly interact with each other. This potentially causes a scalability problem for LOQC, since nonlinear operations are hard to implement, which can increase the complexity of operators and hence can increase the resources required to realize a given computational function.

One way to solve this problem is to bring nonlinear devices into the quantum network. For instance, the Kerr effect can be applied into LOQC to make a single-photon CNOT gate and other operations.

Quantum computing with continuous variables is also possible under the linear optics scheme.

The unitary matrix associated with a beam splitter

For a mirror the corresponding unitary operator is a rotation matrix given by:

is associated with a unitary operator

Since any two SU(2) rotations along orthogonal rotating axes can generate arbitrary rotations in the Bloch sphere, one can use a set of symmetric beam splitters and mirrors to realize an arbitrary SU(2) operators for QIP.

The following figures are examples of implementing a Hadamard gate and a Pauli-X gate (NOT gate) by using beam splitters and mirrors:

For further reading on LQOC & KLM, I would recommend these two papers:

Many physical systems are intrinsically continuous, with light being the prototypical example. Such systems reside in an infinite-dimensional Hilbert space, offering a paradigm for quantum computation which is distinct from the qubit model.

This continuous-variable model (CV) takes its name from the fact that the quantum operators underlying the model have continuous spectra. The CV model is a natural fit for simulating bosonic systems (electromagnetic field, harmonic oscillators, phonons, Bose-Einstein condensates, …) and for settings where continuous quantum operators (such as position or momentum) are present.

If the quadratures are functions of time then the optical phase diagram can show the evolution of a quantum optical system with time.

When quantized, such oscillators are described by quantum harmonic oscillators. which can be written in terms of creation and annihilation operators.

. It is the direct sum of the symmetric or antisymmetric tensors (depending on the bosonic or fermionic nature of the particles) in the tensor powers of a single-particle Hilbert:

acts on the Fock space, changing a

particles state into a

particles state. In the case of bosons, the

operator creates a particle in state

acts on the Fock space, changing a

particles state into a

The quadrature operators can be defined in terms of creation an annihilation operators:

The dichotomy between qubit and CV systems is perhaps most evident in the basis expansions of quantum states. For qubits, a discrete set of coefficients is used whereas CV systems have a continuum:

The following table draws a comparison of CV quantum computation with the qubit model:

Note: qubit-based computations can be embedded into the CV picture, e.g., by using the Gottesman-Knill-Preskill embedding, so the CV model is as computationally powerful as its qubit counterparts.

The starting point is the vacuum state

. Other states can be created by evolving

is a bosonic Hamiltonian. States where the Hamiltonian is at most quadratic in the operators

are called Gaussian. Typically, for a one-dimensional harmonic oscillator, the Hamiltonian of the particle is given by:

The displacement gives the center of the Gaussian, while the squeezing determines the variance and rotation of the distribution.

Of course, complementary to (continuous) Gaussian states are the discrete Fock states. Let’s introduce the eigenstate

of the number operator

.  Each Gaussian state can be expanded in the number state basis. For example, coherent states

Unitary operations can always be associated with a generating Hamiltonian

A CV quantum computer is said to be universal if it can implement with a finite number of steps any unitary which is polynomial in the annihilation / creation operator. Two kinds of universal gates can be distinguished:

Blackbird is a quantum assembly language, capable of representing the basic continuous-variable (CV) states, gates, and measurements. There are four main types of operations:

The following example shows an implementation of Quantum Teleportation with the Blackbird quantum programming language:

For a backend, the engine can target one of the included quantum computer simulators:

When CV quantum processors will become available, the engine will also build and run circuits on these devices.

More information on the platform is available here: https://www.xanadu.ai/software/

Yes, the authors are obviously fans of The Beatles 🙂

Note: to speedup the writing process, a few paragraphs and illustrations of this post are based selected papers and Wikipedia articles on the subject of LQOC as well as a few excerpts from the Strawberry Fields Open-source software for photonic quantum computing documentation.