Cloud-based quantum computing is the invocation of quantum emulators, simulators or processors through the cloud. Increasingly, cloud services are being looked on as the method for providing access to quantum processing.

Cloud-based quantum computing can be used in several contexts, such as:

Major actors are prepping their solutions. We introduced in previous posts Microsoft’s Quantum Development Kit and Q#, capable of processing on a simulator up to 32 qubits locally and up to 40 qubits on the Azure Cloud. Microsoft is aiming at cloud services based on real life topological quantum computers available (hopefully) in a close future.

In this post, we will have a look at Big Blue‘s solutions: IBM Q > Experience is a cloud-based platform that gives users access to a set of actual quantum processors.

The Open Quantum Assembly Language (or Open QASM) is an intermediate representation for quantum instructions. Its source code was released as part of IBM’s Quantum Information Software Kit (QISKit) for use with their IBM Q Experience cloud quantum computing platform. It is a simple language for describing acyclic quantum circuits composed of single or mutliple qubits and single or multiple quantum gates.

IBM’s model of program execution does not allow fully general classical computations in the loop with quantum computations because qubits remain coherent for a limited time. Quantum programs are broken into distinct circuits whose quantum outputs cannot be carried over into the next circuit.

Classical computation is done between quantum circuit execution. Indeed, generally speaking, quantum programs require a coordination between the quantum and classical parts of the computation. Let’s identify the different phases needed to process such a general quantum program:

The syntax of the human-readable form of Open QASM has elements of C and assembly languages. Open QASM generic grammar goes as follows: 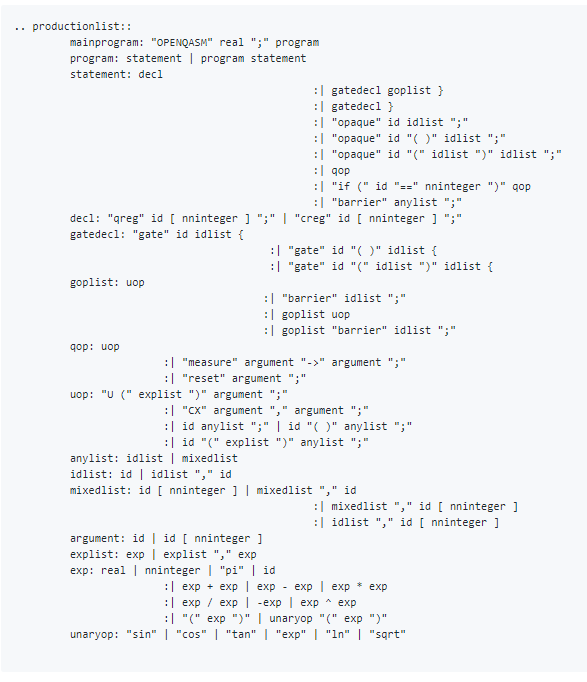 Detailed description of the language is available in IBM’s 2017 paper [PDF} and on GitHub.

IBM’s Quantum Information Software Kit (QISKit) is an open-source quantum computing framework, sitting on top of Open QASM, which sits on top of the hardware. Its goal is to be accessible to people with many backgrounds: quantum researchers and other scientists, teachers, developers, and general tech enthusiasts.

QISKit is a collection of software for working with short depth quantum circuits and building near term applications and experiments on quantum computers. In QISKit, a quantum program is an array of quantum circuits. The program workflow consists of three stages: 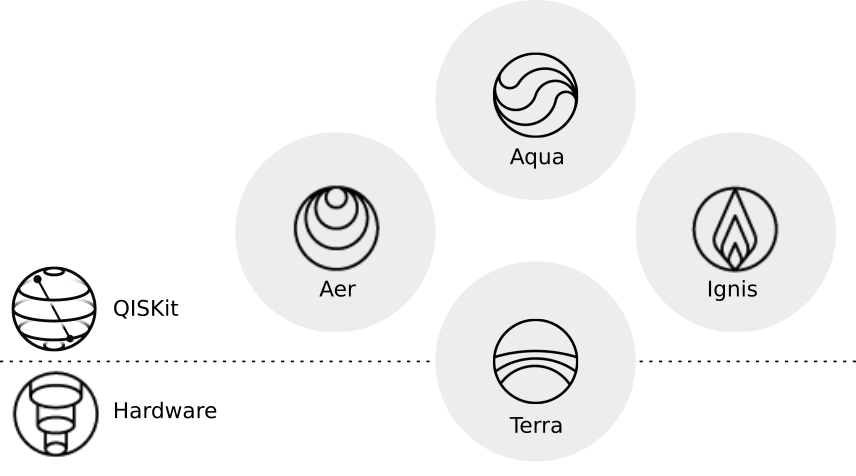 The Quantum Composer sits on top of QISKit. It is a graphic user interface designed to allow users to construct various quantum algorithms or run other quantum experiments. Users may see the results of their quantum algorithms by either running it on a real quantum processor and using “units” or by using a simulator.

Algorithms developed in the Quantum Composer are referred to as a “quantum score”. In such a quantum score, just as with music, time progresses from left to right. Each line represents a qubit (as well as what happens to that qubit over time). A quantum circuit begins by preparing the qubits in well-defined states (

in the picture below), then executing a series of quantum gates in time from left to right:

Quantum gates are represented by square boxes on the score. Once the score is populated with the required gates, the quantum algorithm can be ran either on a simulator or on a real quantum processor. Each circuit must end with a measurement gate in order to run the experiment:

As an example, a simple bit-flip X gate is represented below both on the Bloch sphere and on the quantum score: 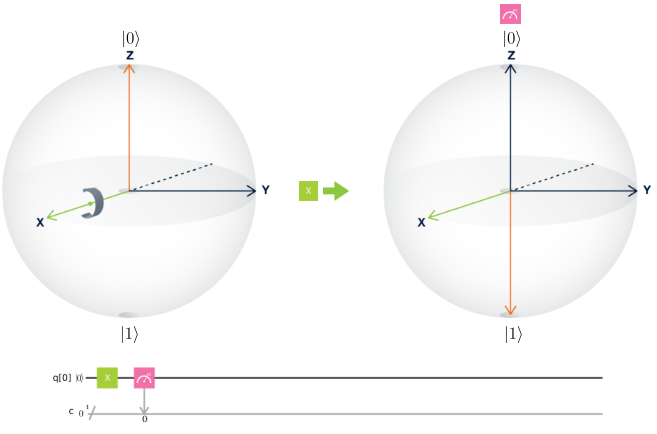 Likewise, a Hadamard gate would be: 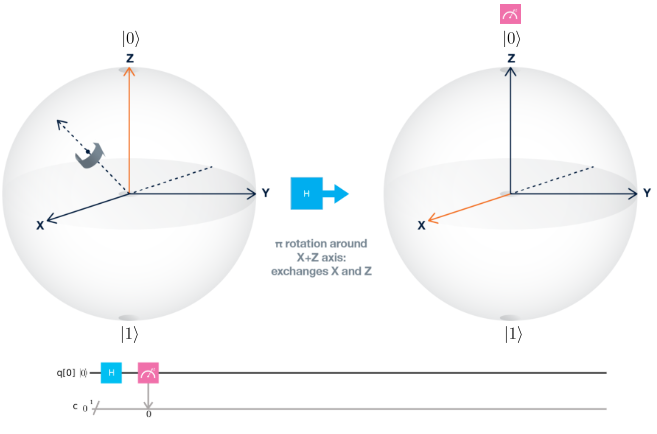 For a typical quantum state superposition, one would have use both gates :

And the resulting measurements would read:

For multi-qubit gates, it is possible to add lines on the quantum score (a CNOT gate for example):

At the time of writing, transmon qubit processors, located at the IBM Research headquarters at the Thomas J. Watson Research Center can be used as backend:

In the following screenshot, a score for Grover’s algorithm (N=2) has been written down. The corresponding Open QASM code can be ran on IBM Q5 Tenerife (Yorktown being down for maintenance at the time of writing): 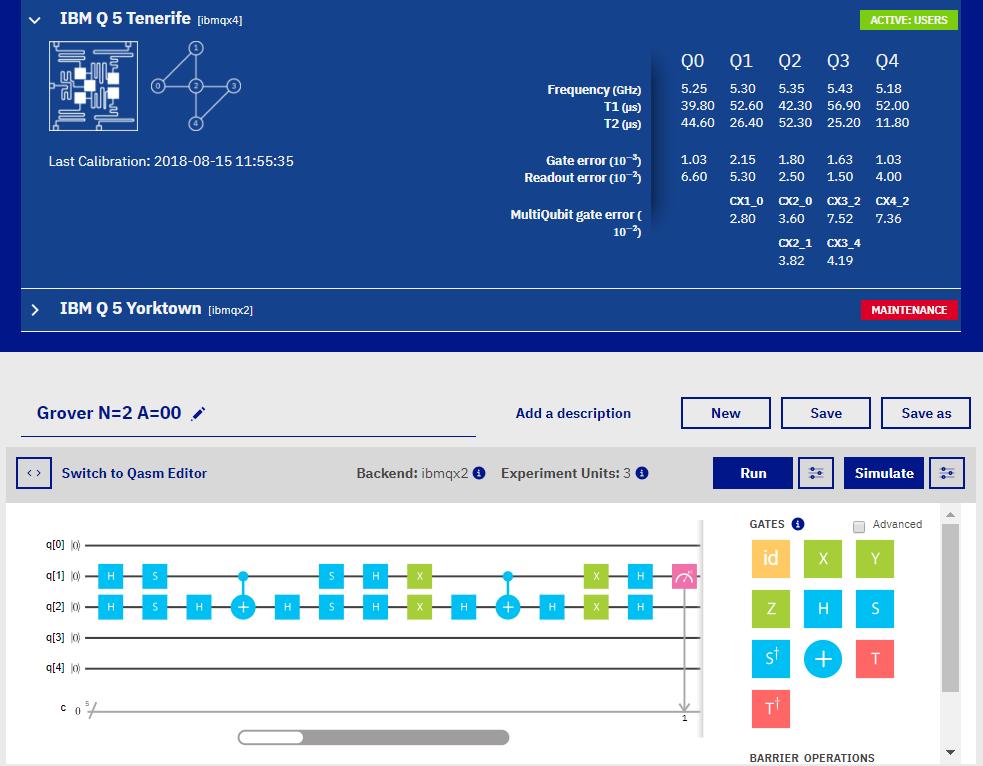 Note: to speedup the writing process, a few paragraphs and illustrations of this post were extracted from IBM’s Q > Experience documentation.