Tonight, I’ll go for a very simple hack: connect a webcam, detect motions and stream a live feed over HTTP. Not sure how it’ll fit with Project “Jarvis”, but who knows …

First things first: the hardware. For some reasons, the only webcam that I had was an old Apple iSight. You know, the old firewire one… Since there is no IEEE 1394A port on the Raspberry Pi, I had to buy a new one.

I settled for a Hewlett-Packard HD-2300 USB webcam. I took a chance, since it was not on hardware compatibility list, but it was available, reasonably priced for its category, and didn’t look like too bad (I know, it is silly, but it is actually one of my buying criteria): 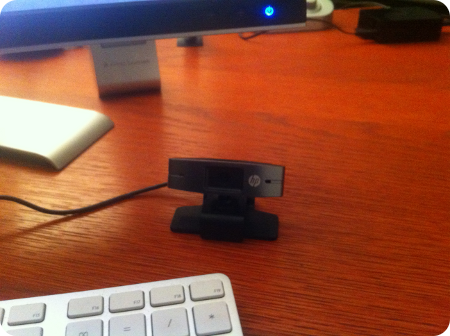 Nevertheless, it appeared right away:

A subsequent “lsusb -v” command gave my nice details about the webcam. Cool 😎

Now, the software part. Motion is a nice piece of Open Source software that (among other thing):

The installation was pretty easy:

I only changed a a few settings. Namely:

I left all the other setting as they were (including frame rates and resolution, as it was only a matter of test), and fired up the daemon:

I set the Firefox’s URL to http://applepie:8081 (as 8081 is the default port used by motion), pointed the webcam at my “Forbidden Planet” poster and shook the cam a bit to simulate a motion: 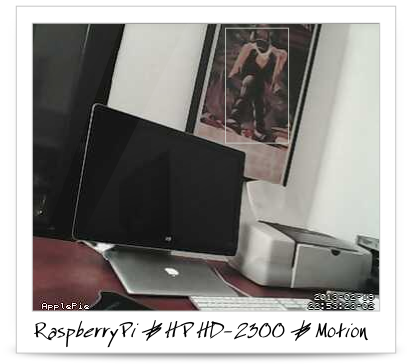 Not bad 🙂 It thought that Robby the robot moved. Now, that’s kinda cool 😎

I guess, that’s it for tonight (and was quite easy, as it was widely documented on many other web sites).

Note: for some reason, I have not received yet a password for my requested account on elinux.org wiki, even though I got the e-mail address confirmation message and activated the account. I guess I’ll update the Raspberry Pi compatibility list later.