In this new post on quantum computing, we are going to talk about quantum teleportation. Teleportation. OMG. Yes, I can see those stars sparking in your geeky eyes …

So … first, let’s clarify a few things, shall we ?

Quantum teleportation is a communications protocol that transfers the quantum state of a system to another spatially separated system. For this, it takes advantage of quantum entanglement. Contrary to what the name suggests, it is not a matter of transferring matter (or energy). 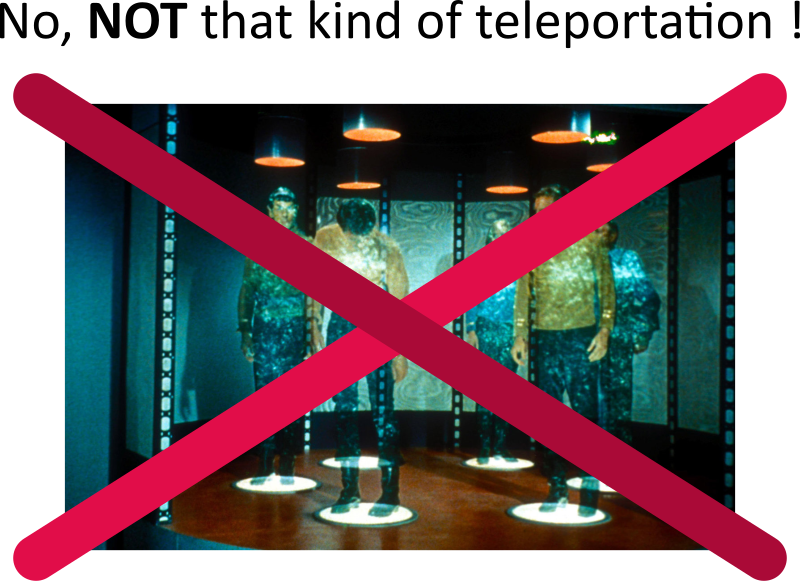 Quantum teleportation is defined as a process by which a quantum bit can be transmitted from one location to another, without the quantum bit actually being transmitted through space

Please stay. I won’t tell Captain Kirk. And Mr Spock would be so proud of you he could smile.

The protocol goes as follows: 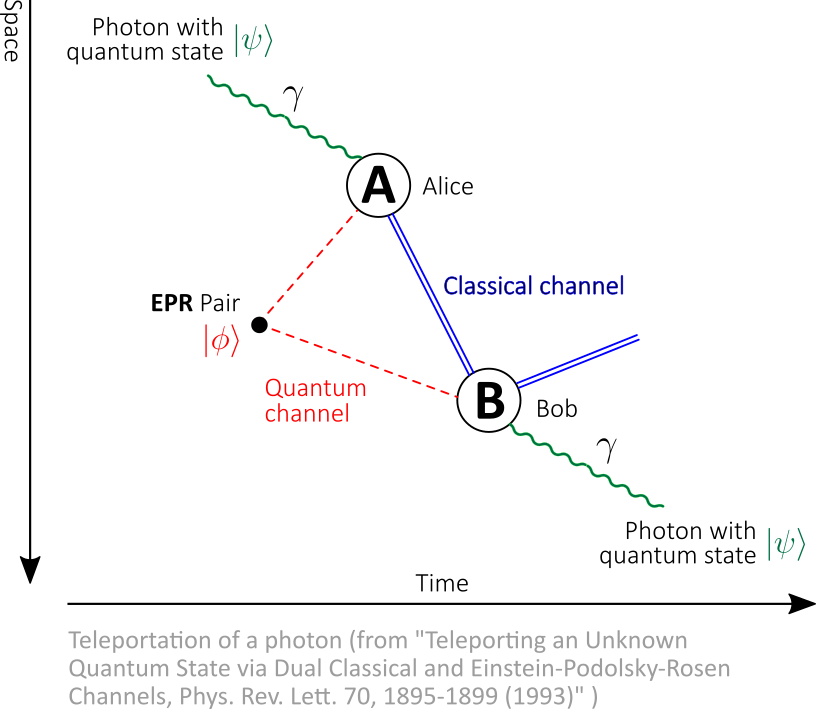 It is possible to express the previous quantum teleportation protocol in terms of quantum circuits. Typically, the unitary transformation that is the change of basis (from the standard product basis into the Bell basis) can be written using quantum gates: 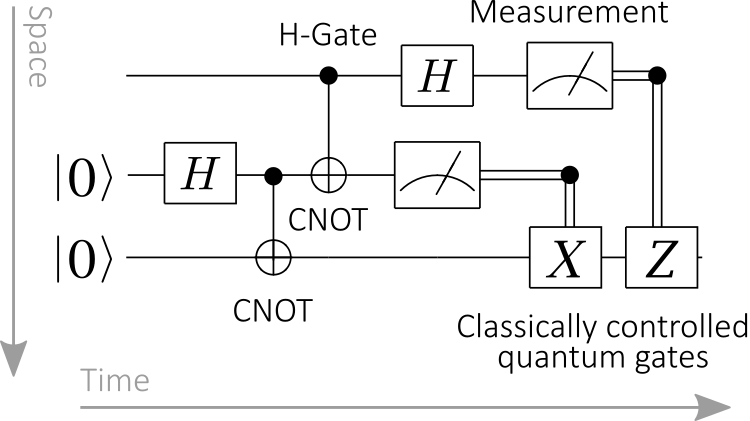 This quantum circuit will be used in the next paragraph, as the basis of a little quantum algorithm experimentation with the Q# language and its Quantum Development Kit.

We introduced the basic concepts of Q# in our last post on Bell states. Basic quantum teleportation code is provided as a sample in the Quantum Development Kit. Let’s have fun and follow it !

Let’s start with the non-quantum part of the program, used to invoke the quantum simulator, feed it with input data and read outputs from it: 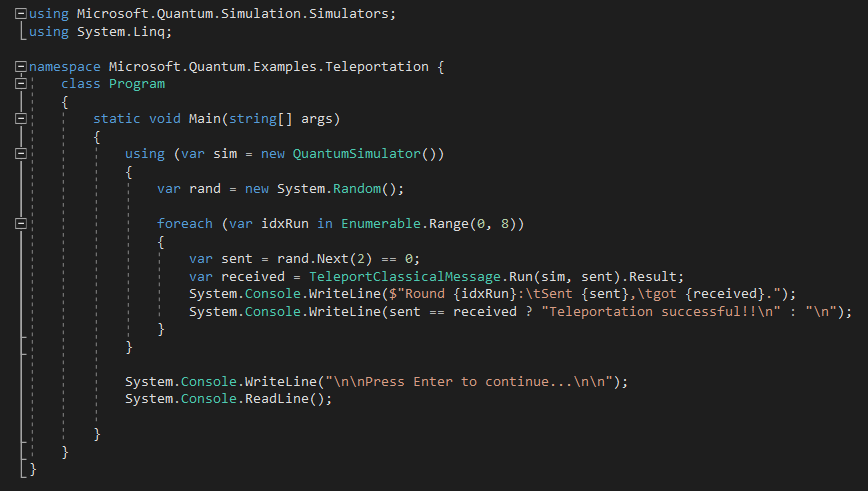 It is rather simple:

Now comes the quantum part of the program. As we have seen earlier on, two communication channels are required:

The implementations are following the circuit for quantum teleportation introduced in the previous paragraph.

The code for the classical channel is: 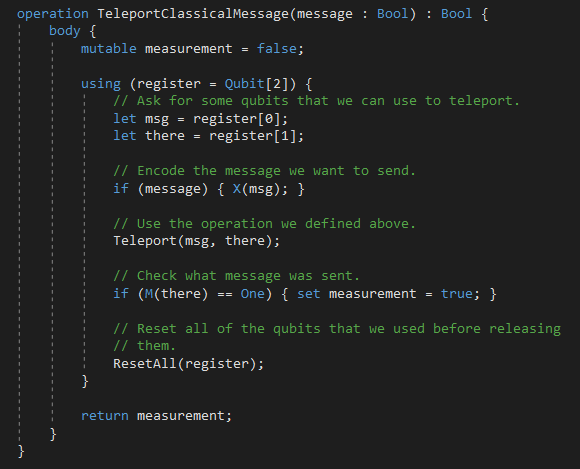 And the code for the quantum channel is: 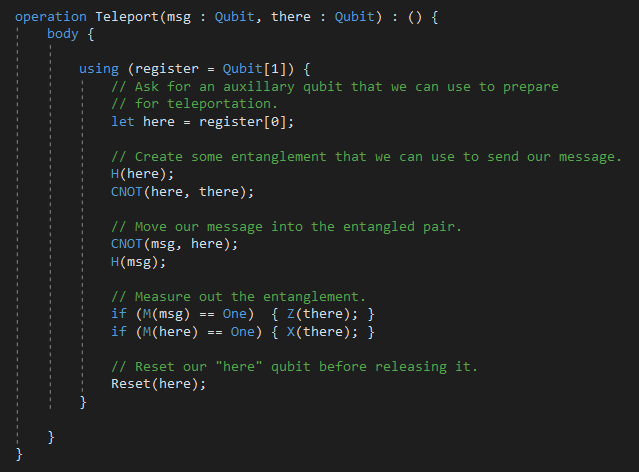 … and the results (outputs from the classical part of the program) are: 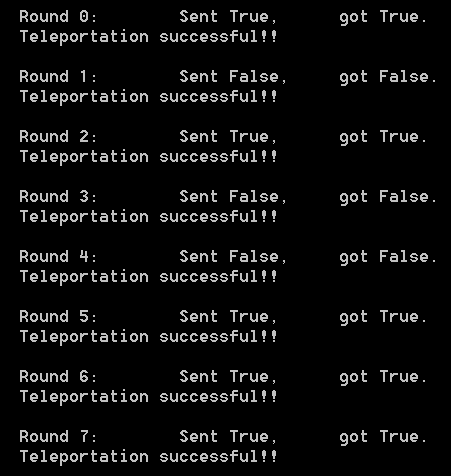 On 26 February 2015, scientists at the University of Science and Technology of China in Hefei, led by Chao-yang Lu and Jian-Wei Pan carried out the first experiment teleporting multiple degrees of freedom of a quantum particle. Later on (2017), the team achieved the first quantum teleportation from Earth to a satellite, while their counterparts in Japan are the first to use a microsatellite for quantum communications.

Masahide Sasaki and colleagues at the National Institute of Information and Communications Technology in Japan demonstrated in late 2017 that they were able to receive and process the information at a ground station in Japan using a quantum key distribution (QKD) protocol. QKD uses principles of quantum mechanics to ensure that two parties can share an encryption key secure in the knowledge that it has not been intercepted by a third party.

Quantum teleportation is a very active subject of research, with concrete applications to telecommunications and encryption.

Note: to speedup the writing of this post, a few paragraphs and illustrations are based on wikipedia’s entries on quantum teleportation. Q# code is based on MS Quantum Development Kit documentations and samples.