First, I hooked up the Raspberry Pi to Altec Lansing powered speakers through the Jack connector.

Next, one has to force audio output to stereo jack (Raspberry PI defaults to HDMI audio output):

The result can be easily tested:

.. and I could hear the phrase “Front, Center” coming out from the speakers.

Then, one has to setup Avahi and Shairport.

Avahi is a free (as in free speech) implementation of Apple zeroconf / bonjour protocol, including a system for multicast DNS/DNS-SD service discovery. It is licensed under the LGPL and included in the Raspbian distribution. Thus, the installation of avahi is quite easy:

Shairport, on the other hand, is not packaged with the Raspbian distribution. It has to be built from sources.

Edit the default startup configuration file (/etc/init.d/shairport) and define the name of your AirPlay device (change the “NAME” variable):

And you’re ready to rock, either form an iPhone / iPad: 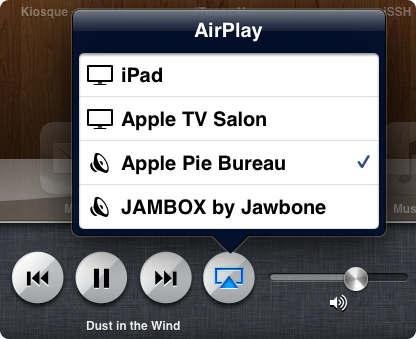 Setting up AirPrint is about the same procedure. The idea is to set up a CUPS server, configure a shared printer and then to broadcast AirPrint stuff via avahi. The bridge between them is built upon the airprint-generate script and a few tweaks.

Next, as usual, one has to edit CUPS configuration file (/etc/cups/cups.conf):

After connecting my AcuLaser AC1100 printer to the Raspberry Pi (and hunting for hours to get the proper drivers), I was able to access CUPS web administration interface (“https://applepie:631/admin”) and add a new shared printer.

Then comes the tricky part: bridging CUPS and Avahi:

The CUPS shared printer, connected to the Raspberry Pi, is now ready to be used, either from GNU/Linux, Mac OSX or iOS devices: 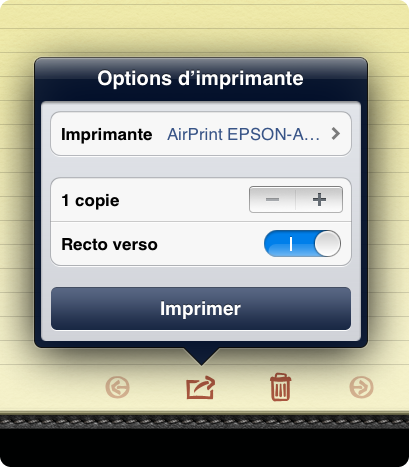 There we go. Appart from the CUPS GNU/Linux AL-C1100 drivers (which were not easy to find and configure), it was quite easy 🙂

The Raspberry Pi (named ApplePie) is now set up, and ready to meet … the other freashly baked apple Pie: 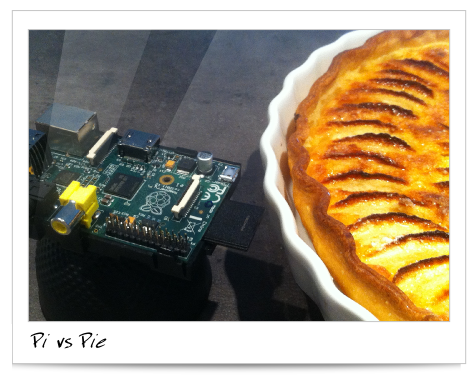