And thus … no SiriProxy for me. But then again, why should I mess with existing closed-source crap, when I can build my own stuff ? Hum ?

Here comes Project “Jarvis“. Ok, the name sucks… I shouldn’t watch these Marvel movies. And the logo is no more than a copy of Siri’s own logo, with a touch of Raspberry color. I’ll work on these later: now, it is time to proof check the ideas behind this project.

The principles are quite simple:

First, let’s record a simple question. “Quelle heure est-il ?” (What time is it ?) will be a good start:

Then, let’s send it to the Rapberry Pi:

In order to get it interpreted by Google’s Speech API, one as to convert the record from Apple’s CAF (Core Audio Format) to the much more standard FLAC format:

After a 1 or 2 seconds, I got the answer from Google:

First, let’s write a few lines of PHP on the Rasperry Pi (see previous post for the details of the Nginx/PHP installation):

Then, let’s fire up XCode, and with the help of the Core Audio API documentation, let’s write down a few lines of Objective-C: 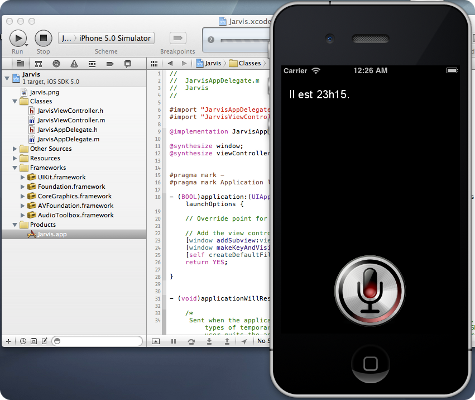 Pretty cool for a 2-hours work 😎

I guess the proof of concept is conclusive 🙂

Now, the trick is that is not exactly fast. Almost … as slow as Siri.

The exchange with Google is the bottleneck. Also, I’d rather not depend on a private external API. I guess, one of the next step will be to see how would PocketSphinx fit into this project.

The CAF-to-FLAC convertion could also be done on the iOS side of the project. I’ll check out this project later: https://github.com/jhurt/FLACiOS.

Also, Jarvis is litterally speechless. Adding a few “text-to-wav” functionalities shouldn’t be too hard since espeak or festival are already packaged by Raspbian.

Then, of course, I’ll have to put a bit of thought into Jarvis’s brain (text analyzer) and hook the Raspberry Pi to some kind of Home Automation system.

And the iOS part needs a lot of looooove.

But I guess, that’s enough for a first step.

One thought on “Project “Jarvis”: step one (proof of concept)”